The Idaho budget and appropriations process has evolved over time into one of the most streamlined and efficient state budget systems in the nation. Foremost, our system is based on an approach that shares key elements of authority and responsibility between the Legislative and Executive branches of Government: 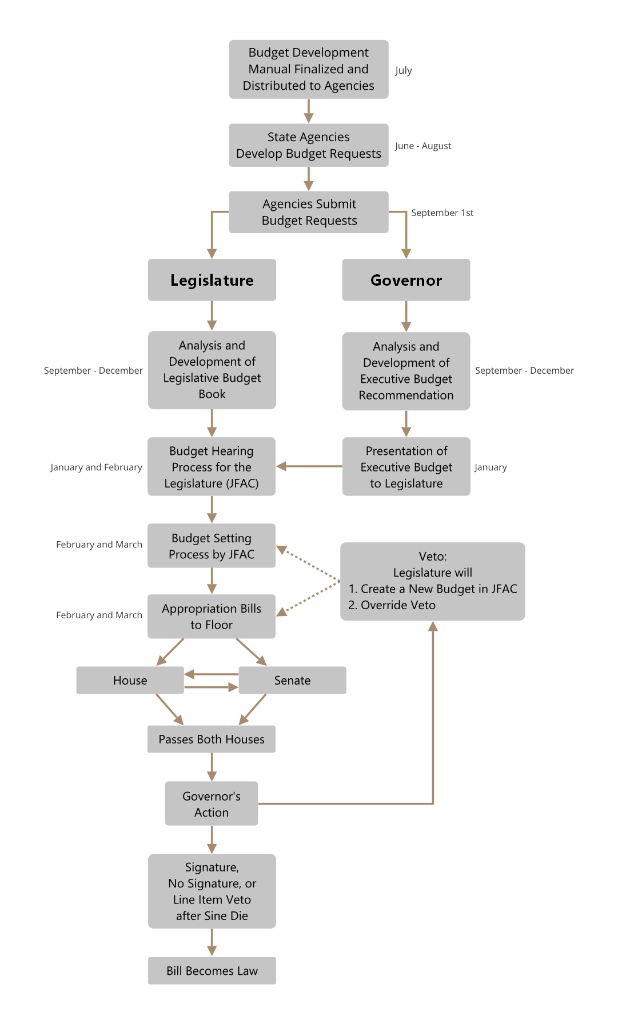 All departments, agencies and institutions of state government which are required by Section 67-3502, Idaho Code, to submit reports of actual and estimated receipts and expenditures to the Division of Financial Management shall submit the same information to the Legislative Services Office for the Joint Finance-Appropriations Committee, not later than the deadline prescribed in Section 67-3502, Idaho Code.

In the preparation of a state budget, the administrator of the Division of Financial Management shall, not later than the fifteenth day of July have available for all departments, offices and institutions of the state government forms necessary to prepare budget requests. Such forms, whether in electronic or written format, shall be developed by the administrator of the division and the Legislatives Services Office to provide the following information:

The administrator of the division shall, on or before the 20th day of November next succeeding prepare and submit to the governor, or to the governor-elect if there is one, information for the development of the executive budget as designated in Section 67-3502, Idaho Code, including the requests of the legislative and judicial departments as submitted by those departments.

First annual line item program budget. The Idaho Legislature also establishes its own budget office, as a result of the Governor failing to present a budget to the Legislature.

Program budget with programs, and program descriptions, with an incremental approach that showed the cost of continuing the 1971-1972 level of services and introduced multi-year estimates for 1973-1974 and 1974-1975 fiscal years.

Program budget with a modified form of zero-base budgeting that used different “Levels” of funding; Level I, Level II, or Level III.

Program budget with a pure form of zero-based budgeting for about 25% of the state agencies. The budget contained decision units that built from a zero base, explaining the impacts of each level.

Program budget with a modified form of zero-based budgeting. About 25% of state agencies were required to build a budget request starting at a base of 70% of their current appropriation.

Governor’s recommendation integrated into the Legislative Budget Book. Program based budget, with requirements to submit performance reports in the budget process as a result of the passage of the Strategic Planning Act in 1995.

Program based budget, summarized at the agency level, with increased emphasis on performance indicators from agencies’ Strategic Plans, and issue analysis and supportive information in addition to budget request information.

(Find your agency below then right click and select ‘Save target as’ to download the file to your computer. )